People sing in every corner of the world.
This inexhaustible variety of melodies, rhytmes and harmonies makes my

hart beat faster; it has made me not only a great admirer but also a dedicated student and teacher. For more than 20 years I am walking the songlines of the world, listening, learning, creating and sharing.

Together with other enthousiasts in my ensembles, choires and study groups we explore the past and present of the world vocal cultures and we sing, sing, sing, exploring the voice colours, telling the old and new stories, tasting the languages. I am happy that I could make my passion - my profession. 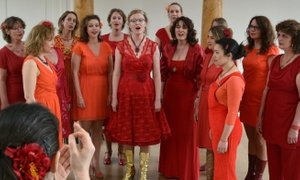 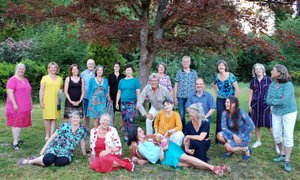 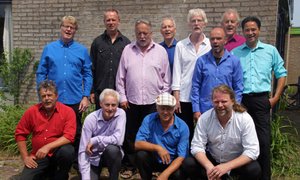 Tatiana joined this vocal ensemble, as a conductor, in january of 2021 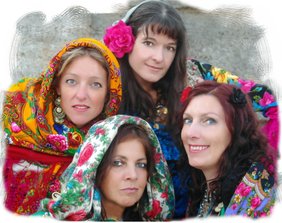 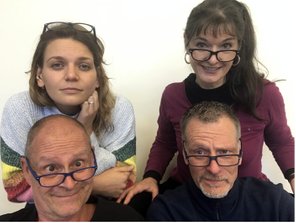 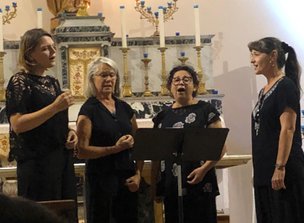 Four enthousiastic apprentices in the art of Corsican polyphonic singing

RUSALKI (Russian: mermaids) is a world music a capella quartet based in Amsterdam, the Netherlands.

Rusalki sings traditional songs from Europe, Asia and Africa. The group's original arrangements give the old songs a new lease of life and an unexpected sparkle.

The group sings in more than twenty-five languages. The program varies from Russian, Balkan and Roma to a more exotic mix of songs from Lapland, Kurdistan, Vietnam, Kenya, Nepal, Ireland, Pakistan and many other countries. Most of the plural harmonies are sung without accompaniment, some with guitar or accordion. The quartet - in sumptuous costumes - adds a touch of theatre to its performance to enhance the music and bridge the possible language gap. 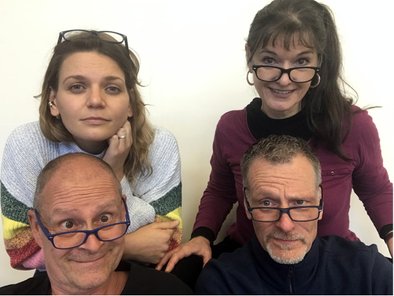 All four members of the QUADRIGA quartet are professional music-, dance- and theatre makers.

The four of us have found the common ground in our love for the vocal polyphonic cultures. We sing songs from Ukraine, Corsica, Georgia, Bulgaria, Croatia and other countries with their distinctive harmonies, rich ornamentation and overtones, fascinating intervals, asymmetric rhythms and complex interweaving of voices.

We already have given many years to research and practice in that field, but we keep being eternal students and we enjoy to take lessons and master-classes together.

Quartet FLORENTINAS is a formation of singers with passion for Corsican polyphony.

Entirely focused on one another, the singers create a field of shared vibrations and overtones, an architecture of sound with levels, cascades, elevations and drop-downs. Not a frozen construction but alive breathing structure, each time affected by the energy and interpretation of the singers.

A few examples of choir arrangements, written for different choirs and vocal groups

A few examples of songs, written for various theatre productions

Lover and his Lass

Where the bee sucks

So good is a man

BACK TO THE TOP